Bespoke Insight Journalists at the V&A

Community reporters from Callon and Fishwick take the stage at the Victoria & Albert museum to talk about their role in the Bespoke project. Steven Robinson AKA Dub P and Darren ‘Dhee’ Burr joined researchers from Dundee, Falmouth, Surrey and UCLan at the London Design Festival where the project team are exhibiting work developed in a unique collaboration with residents from Preston’s Callon and Fishwick estate.

Using a new approach to participatory design called Insight Journalism designers studied stories created by a team of community reporters from the estate. Dub P and Dhee Burr, regular contributors to the ‘Newspaper!’ and local news website BespokeNews reflected on their involvement in Bespoke telling a busy auditorium about the importance of making sure that projects like Bespoke deliver real benefits to the people participating in them.

Singling out the Viewpoint as a good example of design that represented the aims of Bespoke community reporter Dhee Burr explains, ‘Viewpoint grew out of the journalism. As we went round the estate talking to people about life in general it became obvious that people didn’t feel connected to those who made decisions about their lives. This story came up a lot so the designers built a machine that allowed people from the estate to ask a question and other residents to answer ‘yes’ or ‘no’ by pushing a large button on the front of the machine. Loads of people used it’.

Three Viewpoit machines were installed at different locations across the estate. The first in a a small shop near the estate, the second at the YMCA on the estate and the third at Contour Homes – the housing association that owns properties on the estate.

Paul Egglestone who headed up the Insight Journalism process in Preston was also at the V&A and shared Burr’s enthusiasm for Viewpoint. He said, “Viewpoint works because everyone who’s involved, from the families on the Callon and Fishwick estates, to the councillors, housing officers, and researchers, understand the importance of commitment and communication. For example if someone asks a question about whether dog fouling is a priority issue for the area then the recipient knows it must be answered quickly and honestly. Their answer is not only communicated to everyone but is followed up to ensure promises are kept.”

‘For me, Viewpoint is the project’s defining moment. It represents the difference between empty political rhetoric and grass roots reality. Rather than connecting the community to a formulaic, centralised and faceless bureaucratic process it links people to people enabling everyone to change things for the better’.

For Steve Robinson it wasn’t the designs so much as the project itself that had the biggest effect on him. Steve talked about what it felt like to work with designers as they built a larger than life statue of him to promote his music production featuring local artists from the estate. Whilst he’d been excited about the process as the idea became reality he explained how `Bespoke’ had given him a new set of skills and enabled him to find work as a video maker and renewed his passion for the estate. 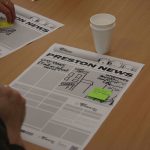