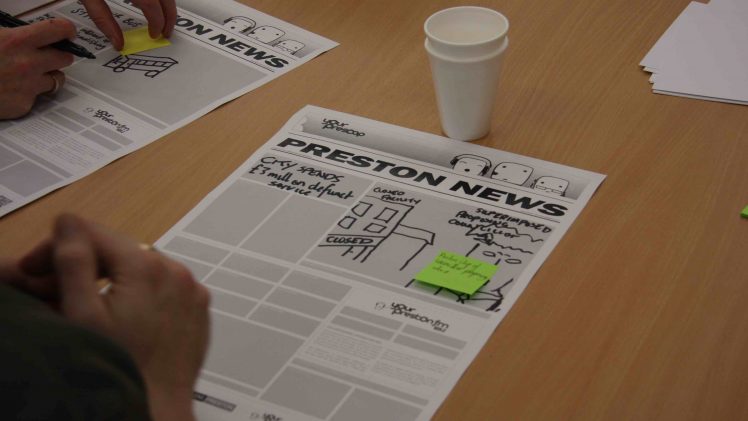 Communities from across Preston came along to Interactive Newsprint’s first set of co-design workshops in the heart of the city in November. Taking place in the light and airy surrounds of community arts organisation Prescap, two afternoon workshops introduced a range of interactive paper prototypes to individuals, groups and local businesspeople.

We showed a selection of examples of how the paper could be used by Prestonians to receive a wide selection of community news and information. These prototypes included a sample hyperlocal newspaper – dubbed Preston news, a music poster featuring a local music producer and sample classified ads page.

But, these prototypes are just the beginning.

Attendees then generated their own ideas of how the paper could be used, based on our prototypes, but taking them in new and innovative directions.

The aim of the workshops was to not only show three early-stage demonstrators, but for our design teams, journalists and user interface experts to collaborate with Preston-based groups, organisations, businesses and individuals to identify how the technology could to meet their own needs or interests in the future.

Over the course of two separate sessions, there were an overwhelming number of concepts and ideas generated. The Interactive Newsprint team now plan to wade through the swathes of ideas, feedback and general creativity to try to narrow down key areas for product development.

Paul Egglestone, project lead and head of digital at the University of Central Lancashire (UCLan), said: “We’re hoping, through these workshops, how communities would develop this technology rather than boffins in a laboratory would develop it. That’s such a strong element of what we’re doing.

“Being able to place the paper in the middle of the internet of things opens up a whole new ball park in the ways we can both tell stories, but also how we can collect data. Who’s holding the paper, who’s touching it, how are they interacting is part and parcel of the kind of stuff this project will explore.”

UCLan in Preston is continuing to work with Prescap to foster community journalism, while Dundee and Surrey will now appraise the outputs from workshops and begin to establish common threads and themes that will be investigated further over the next few months. 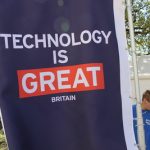 Next Story:
Bespoke Insight Journalists at the V&A