The Interactive Newsprint prototype was demonstrated at the BBC’s Connecting Communities conference at Media City in Salford yesterday.Egglestone took the stage to address conference delegates from industry and community media organisations from all over the world. The demonstration followed a short presentation on the evolution of Interactive Newsprint from its community roots developed during the Bespoke project. One member of the audience commented on the way the new platform for community news and information was being developed with the community.

It wasn’t long before photographs of the demonstrator appeared on Twitter with users wanting more information or in some cases – wanting to get their hands on the demonstrator.

Justin Peters, Editor of the Columbia Journalism Review (Web), chatted to Paul Egglestone during the conference. They were sharing their concerns about the consequences of digital content just creating a shift in power from legacy media organisations to technology companies. Both agreed that interactive newsprint – if it is realised as the researchers want it to be – seems to fill a space between the two.

Paul Egglestone said. “We are committed to making this platform as open and widely available as possible. We’re also committed to making sure it’s affordable so that communities can claim it as the 3rd tier platform that’s uniquely developed by them for their audiences”.

Graham Holliday, writing for the BBC, said ‘it was also possibly the most exciting concept presented at this one-day conference’.

The next round of prototyping is well underway with community groups from across Preston. 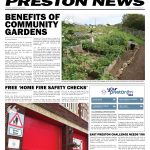