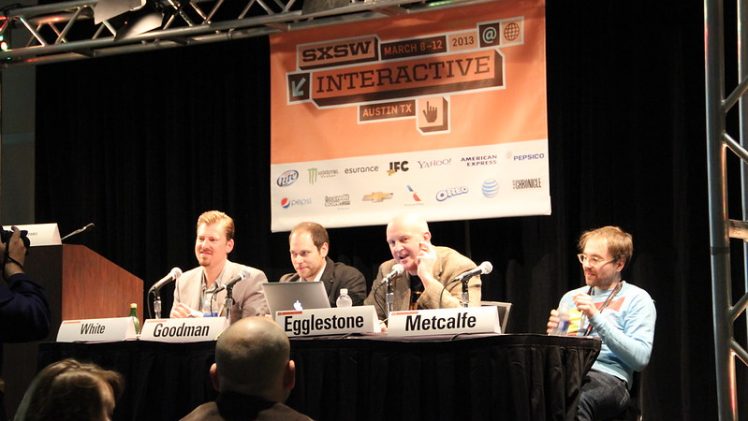 Chaired by the Media Innovation Studio’s Paul Egglestone and featuring the University of Dundee’s very own Tom Metcalfe, Worldcrunch’s Garrett Goodman and Daily Dot CEO Nick White, the panel discussed an alternative digital future, where the internet is made physical.

Discussions ranged from community co- design and cutting-edge printed electronics technology via the Interactive Newsprint research project, internet start-ups and web-first printed thinking thanks to Garrett Goodman and Nick White of the Daily Dot represented the digital migrants: moving, like many journalists, from print to online.

The panel follows work carried out on the research project, and the panel was set up to ponder what it would mean if print were made digital, interactive and inhabited more than the two-dimensions currently available via screen-based technologies.

Paul Egglestone kicked off the discussion by outlining Interactive Newsprint’s work over the last two years, both in terms of developing the technology with technical partner Novalia and in generating a range of prototypes through collaborating with local, national and international publishers. These span local community radio station Preston FM to Brazilian publisher Grupo RBS. Highlighting the power of printed electronics, he announced a key factor in what the project has achieved by connecting a piece of paper to the internet. The Media Innovation Studio’s director also highlighted the disruptive opportunities that this development would provide: heralding a new set of opportunities and challenges to the news and publishing industry.

The technology produced as part of the project creates a capacitive touch function on the paper sheet, and via the internet connectivity, provides voting opportunities as users tough a response or ‘Like’ and these interactions are counted and presented on a webpage. The printed electronics, via a local router, Bluetooth connectivity and headphones, offers dynamic audio – which potentially offers a radical new way to tell stories on printed matter.

This makes so much sense because it delivers digital news in a means familiar to the masses who aren’t online for news. #loveit #digiprint After the introduction, Tom Metcalfe took over and asked what it means to journalism, design and indeed paper if it would be possible to connect it to the internet. Tom is lead designer on the project, and during the last two years has been examining potential interactions that dynamic and updatable paper could offer community and professional publishers. Underneath this work, however, there’s a more fundamental question about what impact this technology and approach could offer the news industry.

If by 2017 we can connect any piece of print to the internet at a low cost-what does that mean for journalism? @tommetcalfe #digiprint #sxsw

Focussing on the Interactive Newsprint’s role as a ‘futurescoping’ project, Tom outlined that the ‘experience prototypes’ co-designed by the project team with the community have introduced a range of concepts, such as how we would engage with paper if it had web connectivity and how users would navigate and activate dynamic content. Nick White then chatted about his own journalistic journey; from print to online – and how he was eager to move beyond paper forms. But, for him, a future without paper isn’t an ideal. He admits to still having a Moleskine notebook, to producing a print version of the Daily Dot for SxSW and to enjoying the tactility of paper. Ultimately, he suggested that the digital world doesn’t have quite the same level of tangibility as a piece of paper, despite all the wonders online offers.

We are tactile beings. Can we reimagine print so that it fits into our lives and we still get its benefits? #digiprint — Jessi Colund (@JypsyJBook) March 10, 2013

Over the last three months, Interactive Newsprint has worked with news start-up Worldcrunch – a Paris based news service that translates news from around the globe into English. After a co-design session at Worldcrunch HQ in Paris, the team opted for a global map that could stream news and from around the world. As the site has always been web-based, thinking about print opened up a range of opportunities. The prototype took the form of a worldmap that streams international headlines from around the globe. Worldcrunch felt this opened up new and public markets, such as libraries, cafes and other social areas.

Questions from the audience spanned commercial opportunities and costs. Walt Mossberg, technology journalist at the Wall Street Journal, also wanted to know how scalable these prototypes would be, and how realistic widespread manufacture could be in the near term.

Responses form the panellists suggested that more research was needed to establish what resources are needed to make the prototypes scalable, but the potential for storytelling is genuinely exciting. All the panelists felt that paper still has a place in the digital world, whether it be offline or online. It’s tangibility and ‘realness’ offer interactions and possibilities that screens and other interactive media can’t quite achieve. 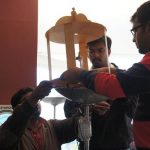 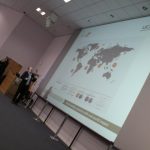