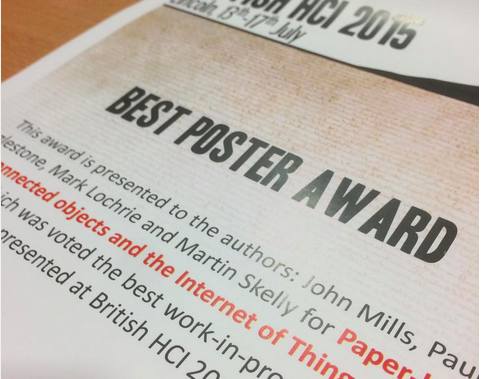 Nice way to top off a great conf with an acknowledgement of your work #BritishHCI2015 http://t.co/Ak3j1r6yzB #EKKO pic.twitter.com/T5FuQwTPnB

A joint project between the Media Innovation Studio, design agency Uniform and the University of Dundee, EKKO is capable of creating digital interactions with paper, bringing a millennia-old technology into the emergent field of the ‘Internet of Things’.

Using conductive inks and a range of other technologies, the device can turn standard print into an interface capable of detecting touch, and connecting to the web. Over the last 12 months, the research team have been exploring a range of publishing prototypes, and our work with Stuff suggests a magazine that can be turned into a games controller.

The work-in-progress poster – Paper-based web connected objects and the Internet of Things – outlines a web-connected magazine that can allow users to play online games via its front cover.

Drinks, Works in Progress and Interactions Gallery in full swing at #britishHCI2015 pic.twitter.com/Mn2QUGEpHm

John Mills, who leads the EKKO project, said: “We’re delighted to have been named as best work-in-progress poster, and are excited about the future work around paper and the ‘Internet of Things’. It’s been great to have worked with such a creative and talented team to deliver EKKO to a prototype stage, and to be highlighted by British HCI for our work is something we’re particularly proud of.”

British HCI featured over 200 delegates from over 20 countries, and this year had a strong political thread running throughout the conference. Keynote speakers included Chris Csikszentmihalyi, co-founder of MIT Future Civic Media, Cristina Leston-Bandeira, professor of Parliament at the University of Hull, Katrín Jakobsdóttir and Julian Assange, founder of Wikileaks.

Other panels covered digital activism and HCI, alongside discussions on the last REF and a whole host of HCI projects and research.

Dr Mark Lochrie, research associate at the Media Innovation who was responsible for mobile development around EKKO, said: It was a great conference to present our first piece of work on EKKO: Interactive Print, especially being able to demo the project to its HCI audience and to observe people interact with print in a different way.

“After months of work, designing, developing and testing the first iterations of; the mobile application (written in Apple’s Swift language) and the backend system (which pairs EKKO with the companion app), it was really rewarding to see our work win best Work in Progress Paper/Poster.”

Further work will continue to develop EKKO over the next few months, and the research team is also developing an analytics and content management system that will allow publishers to extract analytic data from printed IoT objects, along with a range of other web-connected things. 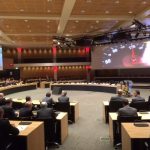