The New European Media (NEM) group met at the equally new (relatively) Digital Catapult Centre on Euston Road for their annual General Assembly meeting at the end of February. According to their own website, the main goal of NEM is “to empower end-users in creating their media and communication environments, including user-generated content, in which the quality of access to value-added and creative content as well as services is key” – values which the Media Innovation Studio strive to embed in its projects and actively seek in its partners.

Despite all the talk of delivery technology – cable, satellite, 5G, twisted pairs and optical fibres to name but a few – the bulk of the presentations and the conversations that followed were rooted in media content creation, new forms of content for different platforms and new types of user experiences made possible by some of the emerging technologies.

Professor Paul Egglestone said: !The combination of ideas, breadth of speakers and range of topics covered across the day made for a really rich experience for me at least. I don’t think I’ve ever attended an event where I’ve been listening to a European Commissioner talking policy in the morning followed by Colin Davidson, The Imaginarium Studio’s Chief Scientist talking about how he made Gollum for Lord of the Rings in the afternoon. Inevitably, the great mix of people sparked a few good conversations.”

Egglestone was one of two speakers invited to represent the Global Media Alliance in London.

A full list of speakers and an itinerary can be found on the New European media website here. 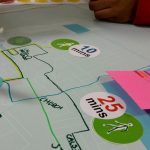 Next Story:
Datamakers school workshop: “It was really fun because now I like data”