Skip Play Repeat is a collaboration between the Media Innovation Studio’s Dr. Mark Lochrie, Pippa Hale, Preston Vocational Centre and Mirador Arts to reimagine games that children would have played with at the turn of the last century using traditional techniques. Games such as top and whip, hopscotch, skipping, hoop and stick and many more. In order to reimagine we must first define what it is a modern day reincarnation would be.

To do this we approached it using a design thinking process. We collected initial research into what games would have been played by the children, then responding to the Elizabeth Roberts Working Class Oral History Archive, which one of the most important collections of oral history testimonies of working class life in north west England. At this point, we needed to understand what it is we were to imagine. For this Mark facilitated an ideation session which included core people from the project to break down the project into smaller chunks to truly understand what should be produced. Questions such as what is play? what is a toy? what was the first street games you remember playing? how does story/narrative influence play? how has technology affected play? what impact technology plays within todays toy? These questions enabled the team to extract further what traditional street toys had in common; movement was considered a fundamental element to playing out. Once the toys were chosen, the team ideated around how these could be re-imagined for a 21st century audience. But subsequently the project needed to speak to members of the public to “make” these toys both in terms of the physical wood making and the coding for the technology. 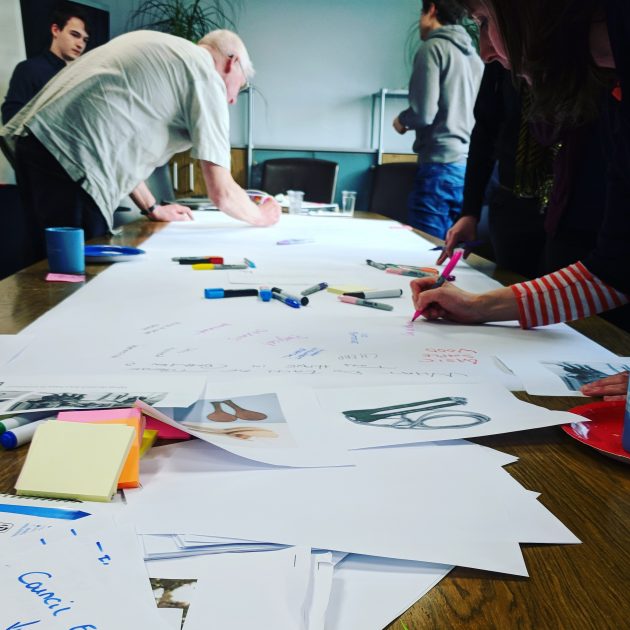 The making process raised further questions around Making; What skills are needed in order to replicate the original toys? How can we up skill people in the making process? How do we gage technical competence? How could these solutions be created such that any one can build and play? What resources are needed to help with the process? How long should a training session be? and Who needs to be in the room?

Consequently it was deemed the top and whip be the main toy that the team would focus on designing an experience for.  This is a toy that would essentially be whipped and dropped so it would need to be robust but also include wireless technologies to transmit the signal – creating the experience. Therefore the technology would need to fit inside a small top and be light enough not to topple over or affect the spinning of the object. We then drilled further down into should the toy be activated or some arena where the toy should be played with. But this plagued further issues around the rationale for the project and moving further away from the original questions around toys, play and technology.

The designs for the top included using a circuit playground powered by 3xAAA batteries which would transmit a bluetooth URL over Eddystone to a Raspberry Pi which in turn would play the audio recordings – talking about play from the Elizabeth Roberts archives. The toy would act as an object within the physical web. When spinning the toy would transmit a particular URL to the Pi. However when the spinning stops and the toys falls a different URL would be transmitted causing the audio to stop. What we learnt from this ideation and playtesting is “Tech is quite fragile”. It was essential that the toy and experience could still be played with, without the digital counterpart. But when combined a new experience would be created.

Another element of play is social. Collaborative play should be achieved so that when whipping the tops the more the people playing the louder the audio or if one top stops but others are still playing the audio can continue to play.

The top and whip were ideated and initial designs were taken forward. PVC then developed a 4 week training course for players to produce their toys. The first 2 weeks were focussed on the wood making whereas the last two focussed on the technology. In particular, players experienced electronics through the littleBits platform then they were taught about coding through a visual interface from makecode on the circuit playground platform.

Pippa’s blog contains a fantastic write up of the rationale for the work including where it originated and further information on the archive. The toys were build and each player got their own toy they created with the tech to take home – creating a legacy for the project. Now the project is going through a write up to conduct the research, media outputs and look for further funding to continue the work.