Our internet-of-things-meets-the-news-media-industry project – NewsThings – has progressed at full speed in recent months. 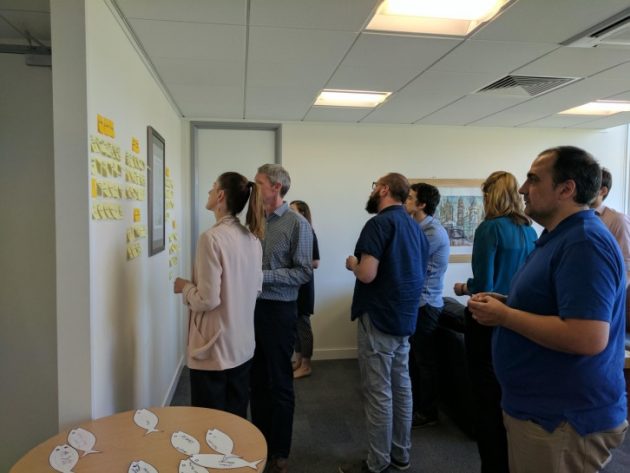 Two workshops in Manchester saw the end of the initial research waves of the Google Digital News Initiative-supported project. Researcher and project lead John Mills worked with a small number of participants to uncover insights from the ‘cultural probe’ method the team has been using in recent weeks. The second session involved staff from Trinity Mirror Regionals and was geared towards understanding industry concerns – but more on that a little later…

Probing into news and information

Developed primarily by project partner Thomas Buchanan, with input from the Media Innovation Studio, our cultural probes – a method honed by design and interaction designers – seek to uncover insights from users by asking them to complete certain tasks and record their activities.

The probes were deployed to a number of participants in both Bristol and Manchester. Over five days, they provided people with a daily task that they had to completed. These ranged from logging how and where users consumed news and relaying how you felt about it (via emoji), making your own newspaper, and flipping a coin to decide whether you bought a newspaper you loved or loathed.

This approach not only allowed the team to better understand news consumption habits, but also dive into users’ emotional responses to their engagements with news media.  Analysis of the data is ongoing, but the team at Thomas Buchanan has identified a number of themes that we hope to explore with the IoT objects we will build in the coming months. These include Well Being, Quality (of news and experience), Context and Routine.

John’s Manchester session, highlighted above, allowed participants to feedback on their experiences, and relay some of their reflections on the process.

The Stinky Fish of News 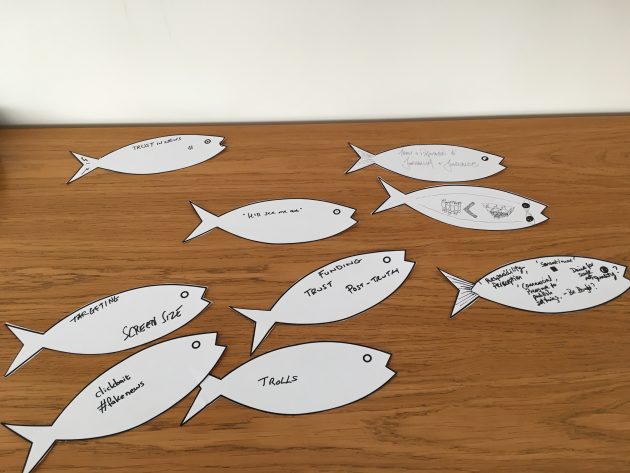 The team also ran a small workshop at the Manchester Evening News with Trinity Mirror staff to get a more in-depth understanding of some of challenges and opportunities an internet-connected news thing could tap into. A range of expertise was represented, with participants spanning editorial, audience data and intelligence and marketing.

The session opened with the ‘Stinky Fish of News’ exercise, which sought to understand the problem people faced that was just going to get worse the longer it was left. The workshop then moved to identify key trends and opportunities, and to isolate some key areas that the research team could respond to.

This data will feed directly into the ideation and build elements of the projects, and the combination of both industry and user insights, requirements and preferences is seen by the entire project team as vital to the entire project.

Although still formative, the NewsThings work is already generating interest within the news media community. In April we presented at the International Journalism Festival in Perugia, and at the end of June were invited to talk about initial work and its context at the World News Media Congress in Durban. The event is the largest meeting chief executives and senior managers from across the globe, and, running in tandem with the Congress, the World Editors Forum brings together the world’s editorial community. 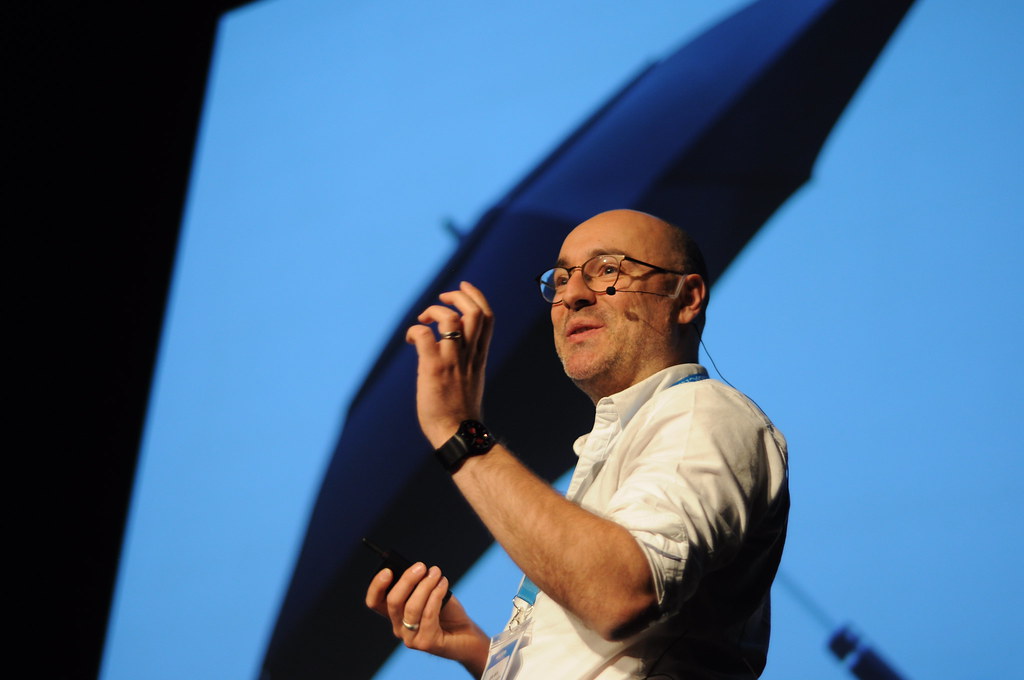 Presenting alongside other examples of research-based innovation, John Mills outlined early research and detailed some initial findings. He also sought to highlight how the methodology could provide unique insights for the sector more generally. 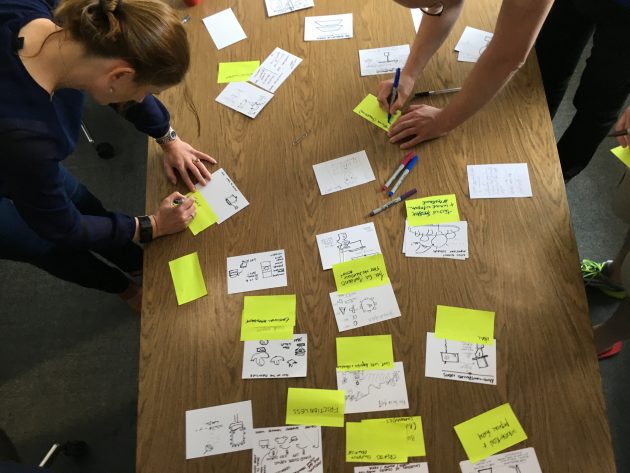 A session the entire NewsThings team have been working towards for months took place mid June. The multidisciplinary team came together to report on the themes identified in the various research activities (the Media Innovation Studio’s market review and early insights, and Thomas Buchanan’s thematic analysis of the probes and workshop materials). The rest of the day saw Trinity Mirror Regionals’ Alison Gow and Paul Gallagher, Tom Metcalfe from Thomas Buchanan and John Mills, Mark Lochrie and Onno Baudouin from UCLan work towards new concepts and ideas.

In a rather hot room on the top floor of UCLan’s Media Factory building, they came up with nine concept groupings that Tom and his team will continue to iterate before final ideas or agreed using a kitemark system adopted form previous projects such as Bespoke and Interactive NewsThings.

The team are particularly excited about the next phase of building and deploying. 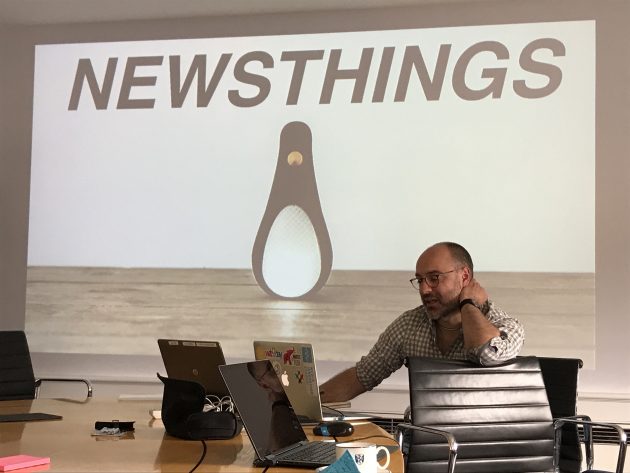 John presented the both the NewsThings’ methodological approach alongside another project that is mapping innovation labs across the globe.

Discussed ranged around Nel’s dataset that encompasses intelligence on market intelligence from ‘top managers’ in the news media sector. His research, in collaboration with a multidisciplinary team at Green Templeton, provides correlation between a firm’s activities and its level of profit and revenue.

The NewsThings methodology – with its focus on generating insights on an individual’s experiences – may provide interesting correlations and causation insights in future activities.

The project now moves into its second phase – design and deployment. Thomas Buchanan, as the leading product design partner, is currently inpretating all the data we’ve generated over the last few months, and will be creating, prototyping and testing our concepts before they are deployed. The Studio team, and particularly creative technologist Mark Lochrie, will be working on the analytic and content management system that works in conjunction with the connected objects.

The next update should be able to share some of our initial ideas for what a connected news object could be!