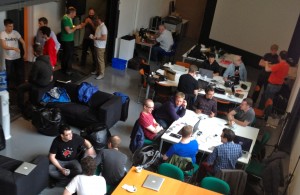 There’s a background buzz of conversation in the bowels of the Dundee Centre for contemporary Arts. It’s accompanied by a feint whiff of hot solder and melting plastic. This is a tech jam Mozilla style – an organised event lasting 36 hours, bringing together journalists, coders, film-makers, geeks, programmers and designers interested in turning live data into physical objects. The theme is ‘News’. The idea is that self organising teams scrape data from the web, spot a story hidden in the data and then physically represent the story by creating an object that responds to the shifting live patterns of live data. 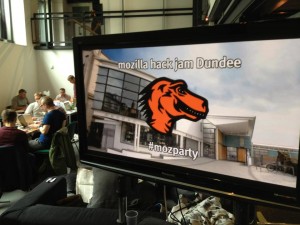 And data is everywhere. From education to energy, health and poverty, governments and NGO’s are opening up their datasets so that ‘anyone can look at patterns and create informed solutions to global challenges’. According to the Open Data Movement, more than 4000 API’s have been launched since 2005. In the UK alone Data.gov.co.uk contains more than 7200 datasets from seven governmental publishers, including 989 from the Dept. of Health and 784 from the Department for Communities and Local Government.

The push towards transparency and a desire to open two-way channels of communication  between citizens and professional raises practical challenges for those who have traditionally taken on the role as intermediary between these parties.  It also raises questions around the identity and motivations of those moving in to that space. 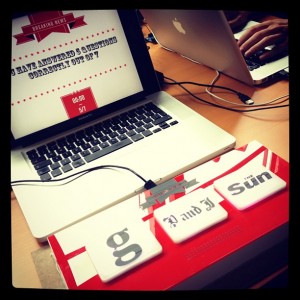 The growth of the civic hacking community shows that those involved in the preparation, dissemination and interpretation of (open) data, on one level, identify with the roles and responsibilities traditionally associated with journalists and, in many cases, will assume that role.

The Hacks and hackers movement reflects a community built on a recognition of those shifting boundaries: Scattered through the worlds of journalism and technology live a growing number of professionals interested in developing technology applications that serve the mission of journalism. But the value and impact of that on the wider community – those who open-data is supposed to empower – and the broader agenda of developing and encouraging innovation is less clear.

Events like mozparty in Dundee are one attempt at bridging the gap between open data for its own sake and open data that performs a useful social function, informing and engaging the public in debate or activity that might lead to social change. These are small beginnings, but there are a growing number of sponsored events like mozparty. Once the participants who attend these workshops understand each other better, a process that will only come through dialogue and collaboration that comes through working together, there might be an opportunity to pool collective talent and build things that really make a difference to people lives.