Slack is a platform for team communication: everything in one place, instantly searchable, available wherever you go.

Slack brings all your communication together in one place. It’s real-time messaging, archiving and search for modern teams.

Instant messaging predates the Internet, it has only been in the last decade we have witnessed these products feature in many platforms, from entertainment consoles to enterprise applications. Messaging, now performs centre role within any communication service, from project management to social media to document editing tools, it has undoubtedly been propelled by the use of designing for play to encourage participation. This can be due to introduction of social platforms and the need to author and consume stories; emoji’s, GIFs, personalisation and moddable tools are great examples of how people interact on these platforms in a playful manner. It is these characteristics that encourage users to participate. This following paper introduces a messaging platform, Slack; and how it is used in promoting collaboration online through the design of tools that reward users to create content or do it in such a way that makes it an enjoyable experience. It outlines examples on ways in which the Media Innovation Studio has adopted the platform and built third party application on its system.

However, it isn’t until recently we have truly witnessed a full circle in terms of a communication company developing on from the previous known IRC platform. Slack is a team collaboration tool with searchable messages and files, chat like application, sometimes referred to as groupware. Over the last year Slack has truly found its place within the team collaboration platform market. With an evolving active participation from 12,000 to 1.7 million active daily users, with the Media Innovation Studio (MIS) being proudly one of. Valued at $2.8B, Slack is changing the workplace communication for the better. Slack enables teams to communicate directly, publicly or private. Alongside its ability to converse and share files, it integrates well with other third party applications and industry platforms, such as Dropbox, Google Drive and now more recently Skype. Slack is more than just a messaging app, it has been built around clever design, a playful vibe and robust. No longer are we seeing design being an afterthought, this has been propelled through enterprise platforms from rich media consumer led applications, we see on a range of ecosystems from mobile app stores to web applications. A perfect example of this the transformation in Salesforce’s enterprise platform buying out RelatelQ because of how it was designed for the user experience. Similarly, with Slack, they were not the first to bring a one stop shop for workplace communication, HipChat has been around a lot longer, but without the same focus on design and the user experience as seen in Slack. With emphasis on design, Slack is built around colours and themes, with an added extra of user personalisation (users can now personalise their emojis with custom images). Furthermore, the platforms main content structure best resembles those seen on social networks, with linked content displayed inline, for example the way users gain additional content from a URL containing video, audio or GIF content; a thumbnail is displayed with a brief description. Over the few years, social media has taught us that people enjoy sharing stories and content (User Generated Content), we are all searching for that 15 minutes of fame. It has become a form of entertainment for both consumers and authors. Staying true to its ever inspiring socialness, Slack has its own language, although heavily inspired by Twitter; users are identified using the @ symbol and channels are #, ironically Twitter thought the hashtag would be considered too technical, Slack has adopted it as its logo. Even the brand can be used as a verb similar to how we describe the process of tweeting, can be achieved with Slack; ‘to Slack’, ‘Slack me it’, ‘have you Slacked that?’.

Over the last six months MIS has adopted Slack for internal and external communications on a number of levels. We have posted 9,700 messages, shared 365 files, built 3 integrations and adopted a further 10. What makes Slack different is its ability to allow third party developers access to its platform via its API. To which is of particular interest to this paper, investigating the potential of repurposing Slack for different applications. Through the third party developer platform we explored the use of Slack for; publishing, notifications and storytelling. Alongside its communication premise, we decided to add team building and encouraging inter team communication through telling better stories both internally and externally. As the main communication in Slack is based around channels (‘chat rooms’) and its members within, we allowed members to create their own channels resulting in a range of purposes from individual projects to team experiences (‘postcards’) and research driven objectives from funding calls to conference/journals calls. With the help from Slack’s bots (similar to the Microsoft paper clip) we are continuing to develop Slack as a replacement for; internal emails, coffee mornings and project update meetings and become that little digital assistant who encourages you to communicate efficiently.

With a growing interdisciplinary team, we found that a management technique through weekly debriefs in a “That Was, The Week, That Was!” email was born out of a need to communicate the practices, successes and to share in failures and lessons learned across a dynamic and highly motivated team of researchers. The aim of the weekly summary was in part to ensure everybody knew and understood what everyone else was doing, just so they could work out whether there were potential synergies and crossovers with their own work.

We took this approach and migrated it onto the Slack platform. Opening up the process onto a shared platform encourages researchers to share progress and stay goal focussed. Currently the weekly debrief can be added prior to the cut off time/date of Friday 5pm, when the weekly report is produced and distributed. The bespoke application looks for a specific keyword “[twtwtw]” inside people’s posts, this post is then retrieved and stored externally for text manipulation and proceeded by distributing the report back to the team via the #twtwtw channel. This method of extracting posts is also being used to distribute content written in Slack onto the Media Innovation Studio’s website through MISMoments and on Twitter.

As the team evolves (currently now consisting of 9 main members and 25 collaborators/partners), with an increase of projects and team members becomes an issue with project updates and meetings taking up too much time and resources. If all 9 members take 5 minutes during the meeting to update everyone about their project this would take up 45 minutes, without time for discussions and problem solving. By adopting the Slack bot, slash command we can automate this process of data collection. The bot (named Debbie) reaches out weekly (Thursday mornings ready for the team meeting later that day) to each member of the team via the a private message, prompting the user with tailored questions about their project updates, based around Who/What/Why/Where/When such as; What are you working on right now?, who did this involve?, what do you need from the team to help you? etc. This helps keep updates succinct and focus the entire meeting. ‘Debbie’ then collates all the responses into a report and compiles this report alongside the agenda for the meeting in a physical but also digital form (via the Slack #meeting channel). Now when updates are given people are only spending one 5 minutes inputting the updates and then gives the team more time for discussions. Some may think this is a way of closing down voices, however we believe it is a way of maximising input, time and resources in order to evolve the automated process. Slack and virtual assistants could truly revolutionise the way projects are running. What if a bot could collect questions about a project during developments that could be used as a way of remembering things during the early stages of a project, or force new users to introduce themselves to the team with predefined questions about how they are and what they do (this could be of particular interest with the way in which the Media Innovation Studio is collaborating with external members), or be used as a way of updating a Gantt chart in real-time which could generate weekly reports or even as a way of being the meeting runner, whereby each member would get the agenda, and make people aware of any general announcements which would decrease meeting times and make people more productive.

“when we do things, we do it one at a time, a robot can do things in parallel”

The next step for ‘Debbie’ is to add a gameful design to encourage participation. This has arisen due to some members of the team not always responding in time or ignoring the private message. This requires the virtual assistant having a contingency plan, by making the process more game like and playful we can encourage members to participate. For example if a user does not respond within the allocated time, the application could bombard them with repeat messages, or fill in the project update with random comments, or at the end of each week each member has a score against their name which is displayed online through a data dashboard. The bot now acts like a real member of the team. 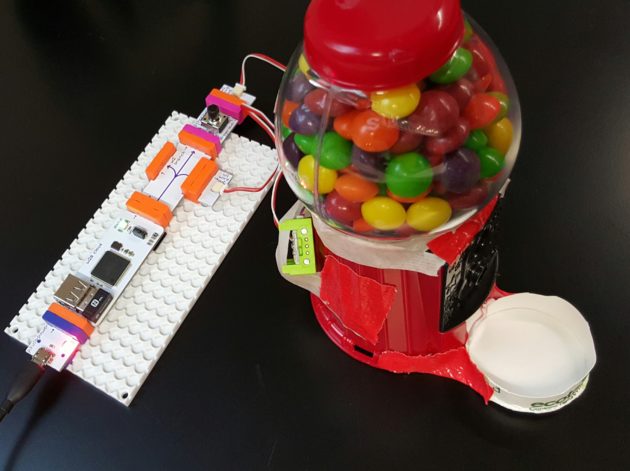 Furthermore, Slack also plays well with automating procedures of other platforms. Services like GitHub, Travis, Help Scout etc., can stream data into Slack. This means that members of the team can see a full record of transactions in one place. We implemented something similar to this with the office coffee machine. It became an issue that no one would clean out the machine and it always depending on one person do it. We developed an application on Slack to randomly (fairly) select someone on a weekly basis to clean out the coffee machine, originally we did this through the private messaging, but realised there it no accountability when it’s private. So we created a #housekeeping channel where the message gets posted. This allows other members of the team to see whose job it is to do the deed.

Although Slack is a software based medium, the Media Innovation Studio has explored the use of combing the written word (from Slack) with an Internet of Things (IoT) platform. In the first instance we conceptualised the idea of prompting the watercooler moment online and use Slack to encourage people to get into the Christmas spirit. During Christmas 2015, we set up a playful Webhook to reward team members who post the ‘Christmas Tree’ emoji, through the combination of a Slack post and a web script, treats were dispensed from a gumball machine connected via littleBits.