Star Trek and Sourdough in Summerhall 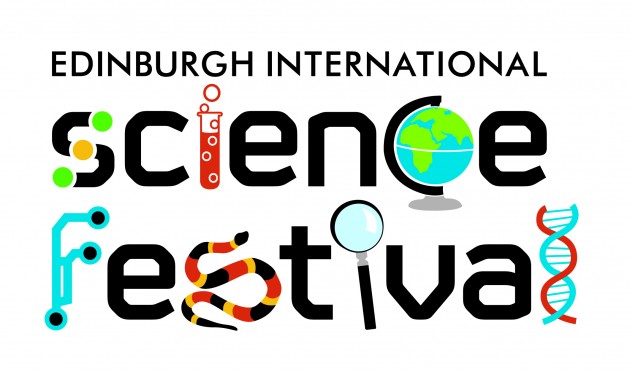 ‘Who owns the moon?’ was the first question put to a well-informed audience packing Edinburgh’s Summerhall venue.

They were gathered to listen to a presentation hosted by Dundee University Professor of Creative Technology, Dr Jon Rogers, and this was no ordinary evening – even by the extraordinary standards of the Edinburgh International Science Festival. Beginning with the distribution of freshly baked soda bread, it meandered through the ubiquity of ‘data’ and skated across the evolution of engineering machine tools and the growing interest in 3D printing to ask why most people choose to buy their bread despite having all the equipment they need to make it themselves. 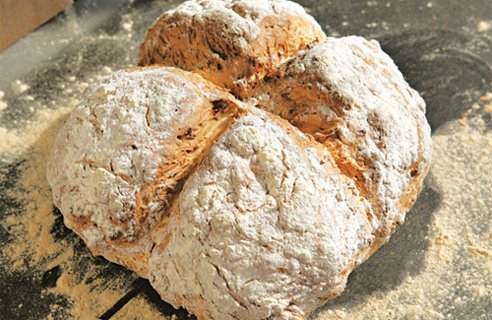 Rogers was joined by the Media Innovation Studio’s Paul Egglestone and Pete Thomas, creative director at Liverpool based design agency Uniform, to discuss Data, Sharing and Making. After fresh bread and a beautifully simple video ‘We are Makers’, Egglestone reminded people they have no legal rights to ownership of any of the data they generate whilst moving about the planet.

He said “Whether we like it or not we are all incapable of avoiding the capture and monetisation of data from our daily lives. Unless you’re Google, Facebook, Amazon or a Government, you are unlikely to be able to either join all your data up or do anything meaningful with it on your own. You may, however, be able to use your capacity and some of the same tools these corporations use to do something more socially useful with them than they will.”

Safecast MiniDoc | by Adrian Storey from Safecast on Vimeo.

After watching Safecast, a short video on how the community in Fukashima distributed self-made nuclear radiation monitoring kits to collect and share street level radiation data in the aftermath of the nuclear disaster in Japan, Egglestone produced other examples of people gathering and distributing data to counter or help people scrutinise official sources.

When Raila Odinga accused Mwai Kibaki of vote rigging during the 2008 Kenyan elections, violence quickly spread across ethnic lines to remote parts of Kenya out of sight of national or international media. Kenyan lawyer Ory Okolloh was convinced that information about the level of bloodshed from the authorities was wildly inaccurate.

He called for technologists and bloggers to help. They responded by creating the Ushahidi crowdmap.

Ushahidi means witness in Swahili. Kenyans used text messages and email to report incidents of violence from across the country. These were overlaid on a Google map quickly painting a more complete picture of the violence than any single organisation could. 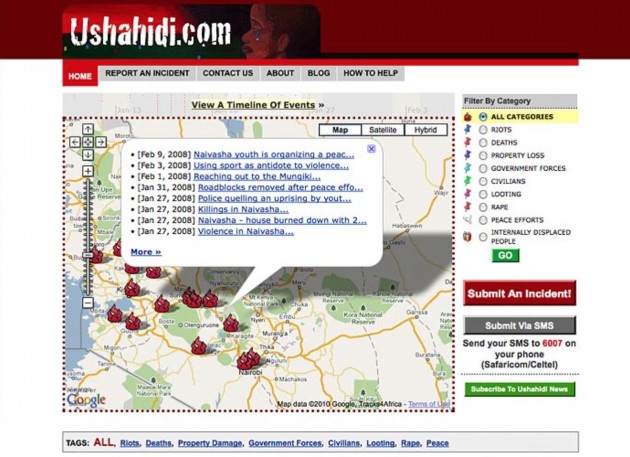 Giving people the tools to generate and share data before reactivating it in the real world was a recurring theme picked up and further developed by Rogers. Gormely’s Angel of the North, Edinburgh’s tram system and Holyrood – each provided examples of how physical and highly visible objects generate digital and less visible data through a series of human responses to them. Like Egglestone’s earlier example of journalists scraping though MP’s expenses data to build a story of fraud culminating in MP Barbara Follett’s departure – a seriously tangible example of making data work – Rogers underlines the need to lift invisible digital data off spreadsheets, computer drives and screens and to use it to make a tangible physical difference in the real world.

As the evening moved fowards, the subject focussed increasingly on ‘Making’.

Rogers surprised some of the audience by examining Disney’s love affair with the maker community, which was consummated by the recent purchase of the YouTube Maker channel and ownership of the growing Maker Fare franchise. 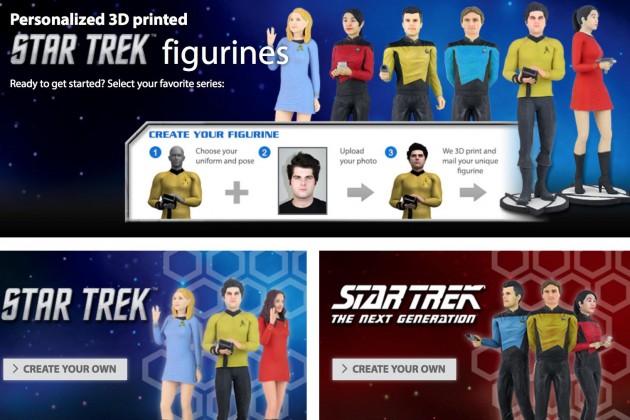 Never keen to languish in the limelight, Hollywood has licensed a 3D printer package for ‘Trekkies’, enabling fans to model themselves as Star Trek characters in polymer using their own desktop 3D printers. Star Trek fans, dispassionate scholars (my interest is of course purely academic), and snooty scoffers, here’s that URL and the official video to spare you Googling it yourselves.

The riff that followed is a familiar story of the absorption, corporatisation, and monetisation of counter culture. As the garden shed, Heath Robinson, mend-and- make-do, chewing gum and string aesthetic of the maker-community gains credence as ‘cool’ with big businesses – and as the volume of people involved in making things themselves reaches critical mass, big business makes its move. 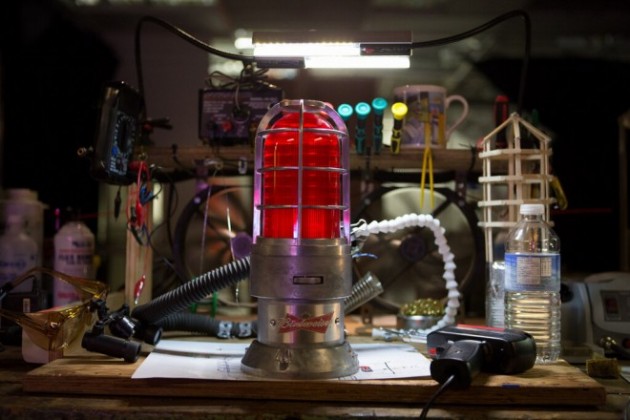 Budwieser’s advert for a web enabled lamp that flashes when your hockley team scores.

Uniform’s Pete Thomas issued a few warnings to those riding the digital wave of content creation. He focussed on the current trend towards adding the word ‘open’ as an adjective invariably coupled to other adjectives like ‘data’, ‘source’ or ‘knowledge’ to any material that people are free to use, re-use and redistribute — without any legal, technological or social restriction. His line of reasoning soon leads on to the value exchange that takes place to recoup the cost associated with making something. This of course is directly linked to the need to protect the rights of the person who came up with the idea in the first place to exchange it for money, goods or services if they wish to.

Thomas suggested that copyright, intellectual property rights and licensing agreements are all about making sure that the designer, author, photographer, artist or inventor gets the chance to benefit from the exploitation their idea commercially. The same individual may choose to employ others to assist with the exploitation process. Now their livelihoods are connected to the need to protect the original idea. So far so good. Thomas points out whilst ‘open’ everything disrupts this established value exchange, it offers little in the way of an alternative revenue stream for anyone other than those who own the means, technologies and processes that foster and support the concept of ‘open’ anything.

In this instance, technology, and more pertinently the owners and manufacturers of technology, are not neutral in the ‘open’ space. They have a vested (commercial) interest in building and selling technologies. Their commercial interest is protected by the legislation and bureaucracy they’d like you and me to give up in the spirit of openness. ‘Ideas are free’ or at least relatively cheap for large corporations able to fill a room with people paid for their time and ideas in beer and pizza at the next hackathon. 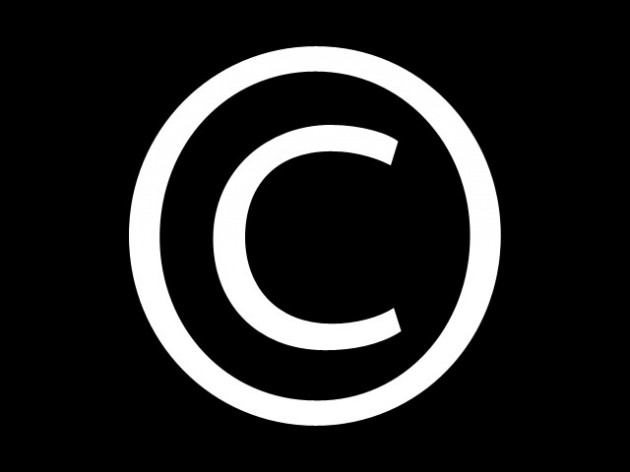