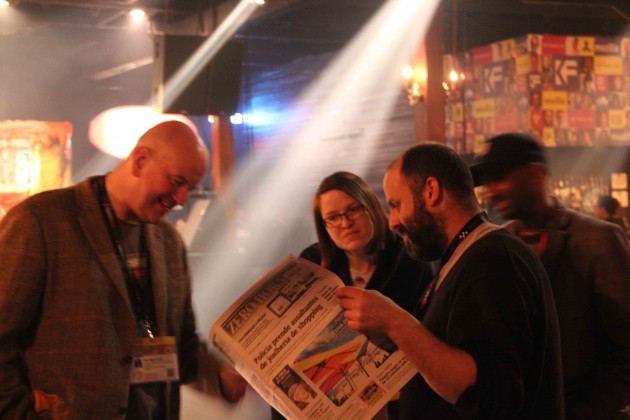 The Interactive Newsprint team are using innovative technology to engage communities interested in creating a new platform for community news.

On Saturday night, in a packed bar in downtown Austin, Rogers, Egglestone, Mills and Metcalfe from the Interactive Newsprint research team showed some of the results to hundreds of people attending the Knight, Mozilla, MIT Media Lab SXSW 2013 party. The entire team were kept busy the entire evening running demonstrations and fielding questions.

Paul Egglestone was pleased with the way people responded to the platform prototypes. He said ‘Most people just get it. They know that media will evolve way beyond tablets. They also know that things are moving really quickly in this area and that it won’t be long before the technology becomes completely seamless.”

Guests from as far apart as Latin America, London, Paris and across the US listened to audio recordings connected to the Lancashire Evening Post and watched as their interactions were recorded, stored on-line and presented back to them on an ipad.

Jon Rogers said: “For me this was the event of SXSW13. Placing demos in front of the world’s most influential technologists and creatives was simply an honour. And it rocked.

“I guess that what comes with the South By territory and it was great to see the look on people’s faces when they touched the newspaper and heard the interview with David Cameron, we even had a few shoulders moving to the beat of Olly Murs!  So where do we go next?  We turn the chat into hack and and shift people’s focus to see an internet coming from a completely different direction.”