The use of drones – relatively small Unmanned Aerial Vehicles – across journalism is gaining ground. There are still obstacles to overcome, particularly regulatory frameworks but also some technical challenges like flight times (battery life) and safety issues including control and stability in adverse weather conditions – but there’s a growing sense that all of these challenges are surmountable and that journalists will soon have another ‘tool in their box’ for gathering stories.

That was certainly the view from 25 or so journalists, film makers, photographers and artists attending South Africa’s first drone journalism workshop – Drone Camp – over 3 days in July. A really creative programme of practical workshops and guest speakers enabled everyone taking part to build and learn to fly a drone. The making sessions were interspersed with case studies demonstrating the power of aerial imagery. Artist Johnny Miller presented a series of photographs from his Unequal Scenes project highlighting the disparity between rich and poor in South Africa. 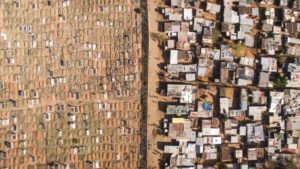 Miller explained how he recorded the images after sourcing locations using census data to identify parts of Capetown with big demographical differences. He used Google earth to create a drone flight plan recording imagery from around three hundred feet. 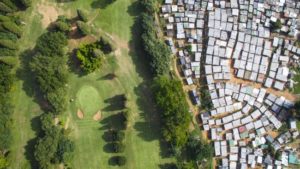 African SkyCam, established by Kenyan journalist Dickens Olowe of Kenya’s Star news and former Drone Journalism Lab researcher and current Buzzfeed fellow Ben Kreimer used a drone to map the Dandora dump in Nairobi. Kreimer talked through the advantage of multilayering imagery with additional information triggered by the viewer through a series of interactive hotspots to create a richer multimedia experience. 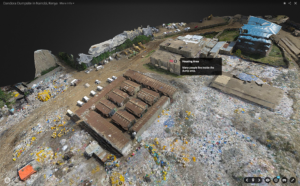 UK examples included aerial video work from the BBC and an interesting visual experiment produced by Paul Gallagher from The Manchester Evening News. Parklife, a large public festival in the North West of England formed the basis of a unique visual user experience of the festival through the creation of an interactive 360-degree augmented reality walkthrough. 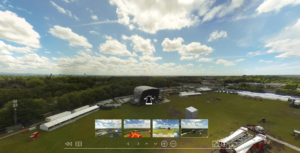 Nero Chan recorded the Hong Kong pro-democracy footage showing the scale of the protest against the Standing Committee of the National People’s Congress move to change the electoral system to something seen as restrictive by the residents – particularly young people – in HongKong. The unique aerial vantage point provides a visual sense of the sheer scale of the protests which spanning seventy nine days between September and December 2014. Chan’s footage was picked up and syndicated by several news providers, and was distributed by image verification service Storyful. After the recording of the protests Chan set up his own drone journalism company. 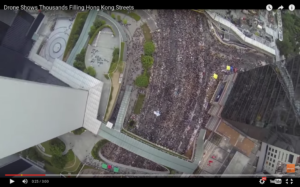 Sessions also covered the legal and ethical principles of drone use for journalism and began to explore the potential for using drones to capture none image based data by attaching sensors to drones to monitor pollution levels for instance.

The highlight of the workshop was inarguably the opportunity to get hands on experience of building and flying drones ably supervised by Alan Ball of Flying Robot and James Patterson of Aerobotics . 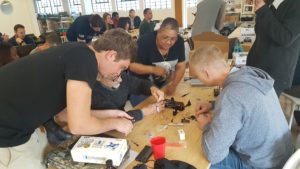 Build your own drone 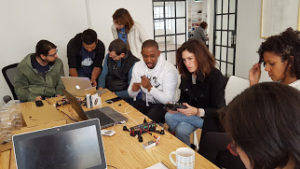 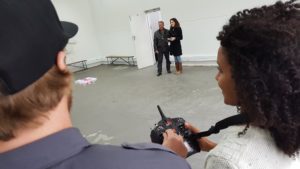