The city of Preston is like many UK cities, with cycling receiving a low proportion of trips made by cycle, in particular in Preston falling from 2.9% in 2001 to 2.5% in 2011. Many places in the UK, are having to do their best for cycle networks with the pieces of what is leftover; both in terms of funding for infrastructure and allocating space in the already congested network for cyclists. This has often led to a disconnect between networks shown on a map and what differing groups of cyclists feel comfortable to use. This is reflected by the low modal split shown for cycling; the majority of people do not use the network as they deem in unsafe due to multiple factors such as incompleteness, high traffic speeds, and proximity to traffic. The flexibility of the bicycle to use both paths, tracks, and roads works against itself when people do not feel safe taking it on an incomplete network of varying standards. The challenge is how to identify and collect data on those routes that cyclists are choosing to use and allow this information to be publicly shared so that people can better plan their cycle routes and benefit from the combined knowledge of other cyclists in their area, as well as provide insight for planners as to how routes should be improved and where to target new infrastructure for cyclists.

This project addresses the Department’s priority for “Safe Secure and sustainable transport.” in particular the annual number of trip stages per person made by bicycle. There is a case for increasing the amount of cycling in cities to ease congestion and air quality issues, yet this increase remains unmet, with the proportion of possible trips made by cycle remains low despite efforts to promote cycling. This challenge is further highlighted by research which reports when stress pinch points and overall connectivity are taken into account, as cycle networks effectively go nowhere as they are not fully connected/realised. True to Preston, where a lack of network is shown through the city, albeit a cycling route that encircles (the Guild Wheel). Although infrastructure is in place, the ‘spokes’ connecting the city to the Wheel need further definition, It is this shortcoming between what is designed on a map and what is actually used, that this project will build upon. Through a collection of stories, social, digital and rich in nature applied by innovative approaches to storytelling, the researchers will better understand the means by which people connect to the Wheel, which routes are taken and why. These stories will be used, shared and coupled with data, creating new data and published as open data. Which reveals the paths that are most aesthetically pleasing, pleasant, hazardous or safe,  the Desire Lines. Therefore aligning with the DfT priorities of both ‘improving journeys’ for current cyclists and opening up a resource for potential cyclists by providing data to enable them to make ‘safe, secure,  and sustainable transport’ choices in Preston.

The Desire Lines Cycle Network project seeks to build on existing technologies and platforms to harness data; the project isn’t about developing a new platform to collect data, but a platform to aggregate data and add value by encouraging storytelling to reveal the hidden ‘cycling’ desire lines of a city to assist cyclists and city planning groups to improve infrastructure. Sharing insights through ‘storytelling’ has been around for years, encouraging and up skilling your audiences to create and share stories has become increasingly embedded into our society, with the likes of Facebook and Twitter. Fitbit and Strava collect data via various mechanisms for differing needs, one is a physical object that resides on our wrists, automatically monitoring our daily activity the other collects data upon request, using the ubiquitous mobile phone for running and cycling “athletes”. Stories are at the heart of what they do, data in itself are stories – you just need to know how to read it. What motivates people to share stories? How do we design for altruistic and intrinsic motivations? One way to investigate this is through the use of ‘play’ and playful interactions.

Firstly as a pilot in Preston, we are interested in how people access the official cycle routes of the city. We refer to these as the ‘Desire Lines’. Desire lines evolve where formal paths are not considered the optimal route, typically representing the shortest or most easily navigated route (and often highlight design flaws. Over time, these paths grow depending on demand for taking ‘the desired’ route. When these are formed across unsurfaced areas their presence is apparent and often highly visible. However, informal routes around cities on paved surfaces do not leave these visible traces. This raises the question, “What do the desire lines of cyclists looks like in a city?” Are cyclists creating invisible desire lines to avoid dangerous roads or crossings? Or are there more pleasant routes which take longer but are aesthetically pleasing to cycle through? Could these lines be used to inform decisions around transportation issues of a city? This project seeks to explore these questions further via a series of qualitative (stories) and quantitative (‘bring your data with you’), ‘data sprint’ workshops and a prototyped platform as proof of concept, piloted amongst a set of varying user groups, from enthusiasts to occasional cyclists. 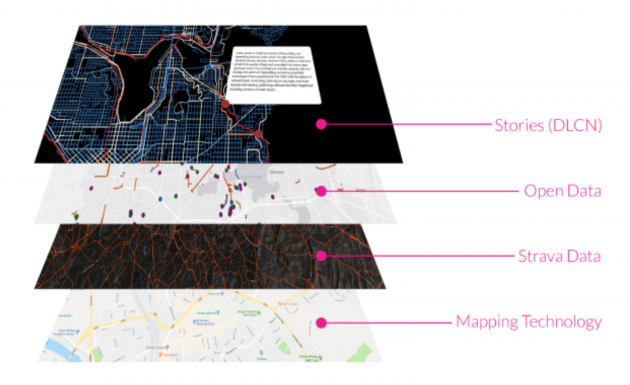 The proposed project extends previous work conducted by the investigators. An initial project was conceived as a pump prime to explore the research questions, liaise with the relevant groups and networks to co-design potential solutions. From these initial gatherings, we advertised the project on Twitter, through established cycle groups, cycling shops in Preston and transport partners from the local and county councils. We identified 39 enthusiasts that live in and around Preston to engage with the research; respondents were a mix of daily commuters and cyclists for recreational activities varying from several times a week/month/year, with all respondents cycling for recreational purposes at some time. These users were also asked about what digital technologies they used to track or plan their journeys. Strava was the most popular amongst the group totalling 35.9% closely followed by 20.5% saying they don’t use any digital technology in their cycling. Out of which, 25.6% mentioned that navigating around Preston was difficult or they simply follow the roads they use whilst driving (but we know this isn’t a preferred choice – 35.9%). In terms of mapping technologies, Google Maps was primarily used to plan routes prior to embarking on their journey. This tells us, that the group of people who enlisted to take part in the initial data gathering, either track or don’t track their journeys, but do use some level of digital technologies in their cycling activities to plan via online maps.

Building on this, we intend to extract this value from the conducted ‘data sprints’ to prototype a ‘data stories aggregator platform’. A web platform that will be co-designed through the sprints, facilitated by  building upon existing open data (from highways to fatalities), creating new data and sharing stories and insights. The resulting visualisation and revealing of hidden desire lines will serve cyclists, government planners, policy makers, activists and educators. The data sprints are conducted to explore and imagine new ways to facilitate the discovery of stories from citizens who cycle for recreational or commuting purposes to help inform decision makers responsible for transportation, and the environment, and cyclists. Moreover, we are interested in how digital technologies and stories can be used to mobilise public engagement and action to provide deeper insights into the successes, challenges and motivations for choosing particular routes for cycling.

The resulting online platform  will then be alpha tested within the same network of city planners, citizens and civil society groups and expanded through beta testing to include the general public to find or tell ‘data stories’ about the hidden desire lines for cyclists. During these testing phases further research will be gathered to truly understand how people use the platform and investigate how the data and stories can be shared to inform decision making.

The project seeks to build on existing technology platforms and research by emphasising the importance of storytelling. Data on its own tells a story but by adding personal stories to this data makes it real. It is crucial this project build on top of research and technology that has already been adopted. This will mitigate slow adoption rates, as participates are already using these services. Furthermore, due to the face this project builds on previous work from the researchers, an audience has already been identified and are active participants. This work will build upon previous work to visualise usage data (https://goo.gl/MMv8ZT, https://goo.gl/7smhLF), to making data with technology (https://goo.gl/z8rzJS) in areas of Human Computer Interaction, journalism, Internet of Things, media and design.

We’d love to have your input. For more details see the poster below. 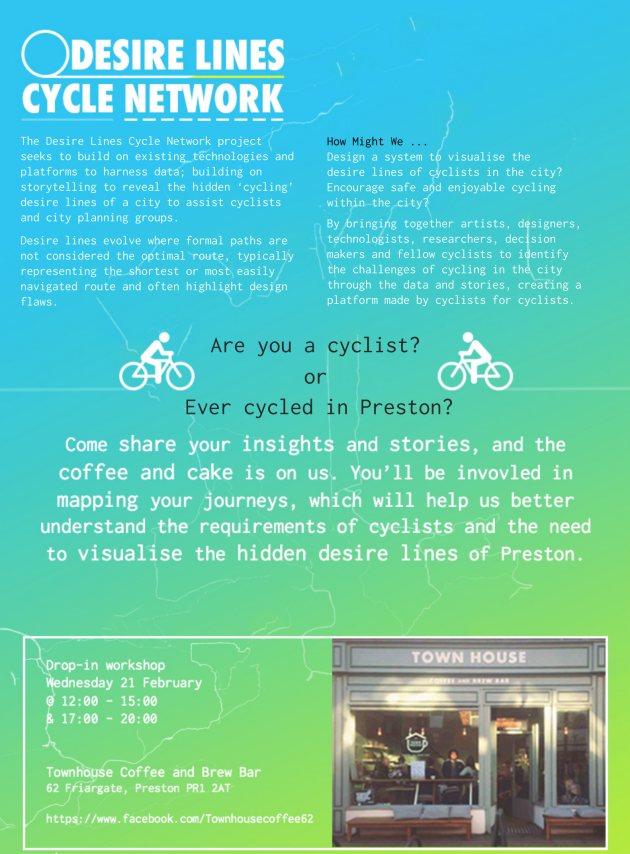