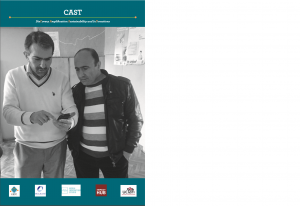 The final 50 page report is out

New knowledge and impact have been created around:

Innovation is fundamental in order to answer the growing trends in mobile and multimedia consumption of content, as well as the importance of online and digital tools in making local, relevant and socially valuable information accessible, and ‘findable’, to audiences.

CAST aims to drive this forward by testing a new way to amplify independently produced information that would otherwise be drowned out by the ‘noise’ of the Internet. It does this by prototyping a lightweight community connectivity system capable of hyperlocal content distribution.

CAST has trialled a new community communication network in rural Armenia developing models to emerge alternative news media in a highly politically pressured national state. We scraped news and information from news sources alternative to those normally accessed in the community as well as providing the villagers to report their own stories and set their own news agenda. The project was a collaboration between the Media Innovation Studio, UK, Impact Hub Yerevan and SMART Edge Platform provider WICASTR™, Yerevan.

This report presents the empirical findings of the first field trial of the CAST prototype. It sets out our approach and explains how we built an online to offline network and why. It then presents early findings on proximity insights: what data we captured and how that data was processed. We present key learnings from the project offering suggestions for future iterations. It situates CAST in a number of research fields including place-based journalism, hyperlocal publishing, information communication systems, media plurality and digital literacy. It draws into focus the potential and limitations of a village connectivity system aimed at enhancing the discoverability of alternative news and information.

Watch the project documentary on location

26 devices were installed in three villages: Lernapat, Ltchashen and Kamaris. Locations included schools, health-care centres, bus stops and village meeting spots. The total sample of hits to all devices was 120,077 (82,431 in Kamaris compared to 37,646 in Lernapat.) Once restricted to grounded data, the total number of visitors to the two villages was 485.

In total, 269,836 calls were originally logged to the devices. However once duplicates, foreign IPs, invalid requests and other errors were accounted for the total sample of usable data was 1,704. This represents the total number of pages served.

In total between June – December 2016 from seven participating news and information providers, 4938 articles were served, 520 videos, and 12,521 images totalling 22GB of data. Wikimedia was provided as an offline static resource on the devices.

34 training visits, installation or meeting dates were held in the villages but a permanent project representative or trainer in the village would have been more effective to maximise impact and learning. Community projects of this nature need local representatives and consistent training over sustained periods.

Digital literacy was developed by encouraging young people to write about their village. Lernapat (population of 2,000) engaged 12 authors and 3 editors to the site. They published more than 70 articles in categories about their village culture and sports. Kamaris and Ltchashen engaged 5 editors each.

Overall activity to the CMS WordPress hosting hyperlocal content produced by the community performed better than scraped content from news providers. Total hits to the three village .be sites was 950 compared to 754 .in.

The CAST system can increase audience numbers by providing offline accessibility to the population of the village. One news provider Arm Weekly News reported: “During the CAST project site attendance increased by 5%.”

The overall deployment of WICASTR™ devices was insufficient to offer adequate coverage or to trial CAST in a mesh formation. The pilot thus stopped short of offering an effective alternative to online experiences in any one village.

Mobile Internet connectivity remains a major issue in remote places. Even the CAST system required some connectivity and this was inconsistent.
CAST can transfer data from devices in villages (the local cloud) to the Wicloud (the online cloud), and from there a technology lead can log on to see the data online (in the MySQL database), and export the data to a host datastore via CSV file. Once exported, it can be removed from the WiCloud servers. However in our trial, the system had to be manually overridden and data brought in physically by connecting to each device in location.
39

Online to offline systems which cannot rely on services provided by the technology giants need bespoke analytics and these should be put in place from the start.

Where some Internet connectivity is available albeit slow or fixed location this detracts from the value of village-only networks. CAST further evidences the stranglehold of the Internet social media giants such as Facebook.

User design must be central to any community-facing interface as this can be an immediate barrier to engagement.

Digital habits are such that on-demand and constantly refreshed sites have been normalised and there is an expectation for regular updates on a project offering news and information.
Digital literacy was low among many user groups and there was much confusion around data management, privacy and capture. CAST went some way to informing citizens about personal data but much more needs to be done.